From Book 1: The Consultant’s Guild has served the Aurelian Empire for over a thousand years, working in the darkness to hunt dissension and eliminate traitors.

Now the Emperor is dead.

For Shera, an assassin in the employ of the Consultants, the Emperor’s death is the beginning of a nightmare. Powerful forces hunt the Heart of Nakothi, a cursed artifact that can raise a second Emperor…and corrupt him in the process.

But some desire power at any cost.

The Guild of Navigators, an infamous collection of swindlers and pirates, has been paid a fortune to secure the Heart. Their only lord is greed, their only loyalty to gold, and they would sell the Empire’s freedom for the promise of a quick coin.

In the shadows, a woman works to set the world free.

On the seas, a man seeks to raise a lunatic to lord over mankind.

Will you walk the shadows here with Shera? Or will you explore the seas with Calder, in the parallel novel "Of Sea and Shadow"?
Kategorien: Belletristik, Bestseller auf Englisch
Vom 3. März 2021 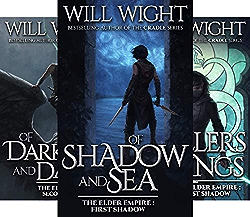