Love to Prove You Wrong

Hating the guy who ruined her confidence would be a lot easier if he wasn’t so freaking sexy...

For Addy, small-town life is just perfect. She’s about to expand her inn with ten new rooms and a petting zoo, and she’s helping the mayor’s son organize his wedding. If only her pet duck would stop escaping all the time, her days would be an absolute breeze.

But then Justin Miller shows up at Addy’s check-in desk. The guy went from small-town stud to lead actor in a popular series, and he’s behaving exactly like the celebrity he is. Smug grins, dimples to die for, and hordes of women chasing him all over town.

Addy has no intention of letting him in her life again—not after what happened in high school. So what if he keeps trying to prove he’s changed? No amount of helicopter rides and intimate outings will change the truth:

Justin Miller is nothing but trouble.

Love to Prove You Wrong is a sweet romantic comedy and the second book in the Old Pine Cove series. All books share the same setting, but each story features a different couple.
Kategorien: Bestseller auf Englisch, Liebesromane
Vom 30. September 2020 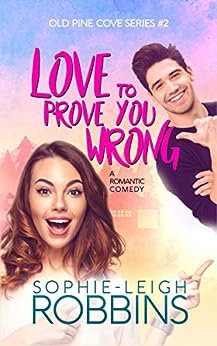