Dive into five full-length novels full of kick-ass heroines and the sexy wolves who love them. From fated mates and enemies-to-lovers to heart-pounding adventures starring shifters, vampires, and witches, this paranormal box set will leave you breathless and anxious for more.

Half Wolf by Aimee Easterling - When half-shifter Fen is cast out of her home pack, she and an unlikely ally are forced to shore up her waning power in an effort to save half-breeds everywhere.

Lost Wolf by Stacy Claflin - Victoria is troubled by a secret that already killed her once. Can she unravel the mystery surrounding the sexy alpha before it kills her again?

Descendant by S.M. Gaither - Infected by a werewolf bite, Alex is plunged into a supernatural war — and discovers her family’s bloodline holds the key to saving the world.

A Shifter's Curse by Raven Steele and Ava Mason - With a dagger in her boot and blades in her bra, Briar's only goal is to kill the Alpha responsible for the destruction of her entire family. But she soon discovers the only way to get close enough to kill him is to join his pack.

Tattered Loyalties by Carrie Ann Ryan - Pack Alpha Gideon must take a mate — except the one destined to be his is a woman whom he shouldn’t desire…the submissive wolf daughter of his rival Pack. 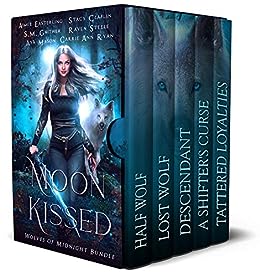