Beatrice has developed a delicate nose for lies. It gets the old hound into trouble all the time—with criminals, Scotland Yard politics and even her friends.

The series has topped Amazon's "International Mystery & Crime" charts in US & UK repeatedly and is lauded by mystery fans for its prose, wit and imagination.

The first three novels are included in Box Set One.

Behind Closed Doors
Wealthy, powerful men are committing suicide. Or are they? When the same DNA is found at each scene, DI Stubbs suspects someone is dispensing a personal retribution. Beneath the chocolate and charm, Zurich hides many secrets.

Raw Material
Beatrice is divided. Hunting a sex offender on London Underground while trying to investigate illegal activity on a Welsh beach stretches her to her limits. Her partner and neighbor decide to assist. But amateur detectives and professional criminals make a bad mix.

Tread Softly
It is time for a sabbatical. A gourmet trip to the north of Spain is exactly what DI Stubbs needs. Until she meets an old acquaintance who lures her into an investigation. Beatrice is up to her neck in missing persons, murder, corruption and Rioja.
Kategorien: Bestseller auf Englisch
Vom 19. März 2021 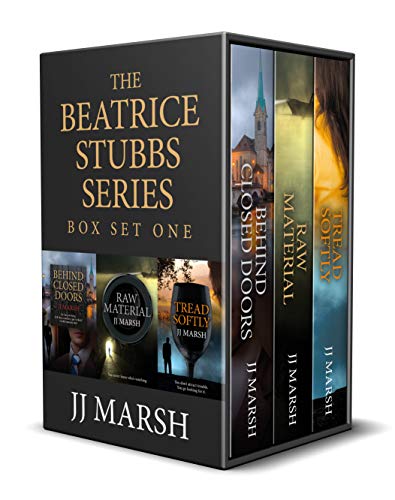